Composer of the Month 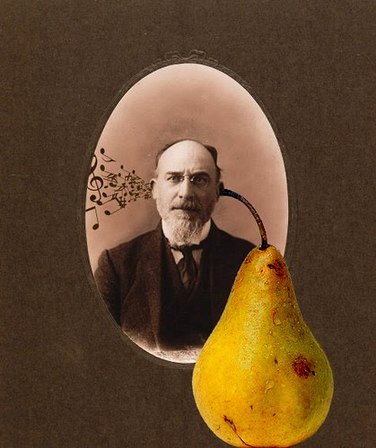 Worked collaboratively on a play entitled "Parade" where Pablo Picasso designed the costumes and sets.

Satie owned several identical velour suits and would wear them daily with a bowler hat.

Satie was good friends with Debussy and Ravel.

After 1910, many of Satie's compositions would receive an odd title. Two examples are: 'Three real flabby preludes (for a dog)' and 'Unpleasant Glimpses.'

"Some of his works also featured odd instructions for the performer, not intended to be taken seriously, as in his 1893 piano work, "Vexations", which carries the admonition in the score, 'To play this motif 840 times in succession, it would be advisable to prepare oneself beforehand, in the deepest silence.'" (All Music Guide, 2008)
*Note: "Vexations" was played in its entirety (repeated 840 times by several different pianists), and the first try took a total of 18 hours and 40 minutes.

"[Satie] wrote in the first edition of Heures séculaires et instantanées, "To whom it may concern: 'I forbid anyone to read the text aloud during the musical performance. Ignorance of my instructions will incur my righteous indignation against the presumptuous culprit. No exception will be allowed.'"" (Williamson, 2005)